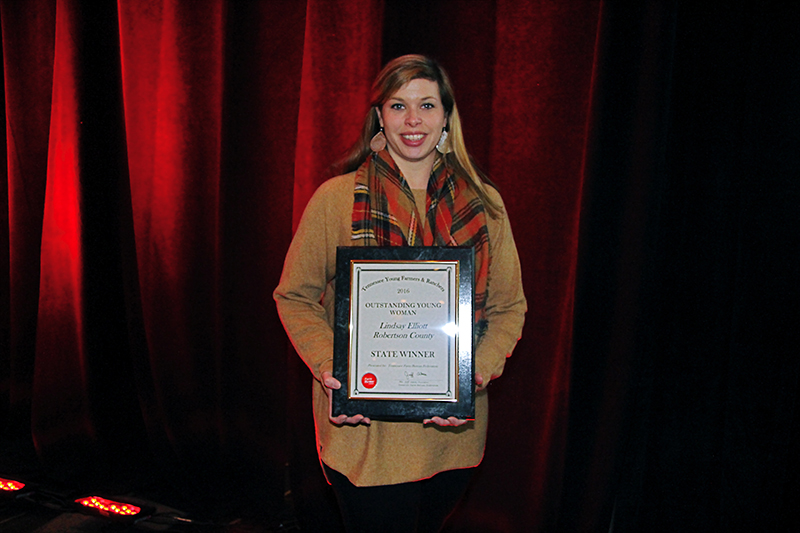 Twenty-eight women between the ages of 18-35 competed for the prize, which is chosen based on Farm Bureau/YF&R activities, leadership, communications skills and community and civic involvement. Five district winners were chosen, of which Elliott was District II winner; and then the state’s Outstanding Young Woman was chosen from those five winners to receive the Mabel Pattat Leadership Award.

Mabel Pattat was a leader in YF&R in the 1950s from Fayette County. She was a county women’s chair, board member and was on the state women’s committee where she served as chair. Under her leadership, the women’s committee became more active in commodity promotion, public relations, legislative activities, leadership development and Ag in the Classroom. After passing away from a lengthy battle with cancer in 1991, the TN Farm Bureau Women’s committee established the Mabel Pattat Leadership Award to be presented to the YF&R Outstanding Young Woman each year.

Elliott exemplifies several of Pattat’s leadership qualities, passion for agriculture and desire to tell agriculture’s story to all people. Her extensive involvement on the county, district and state level of YF&R, in addition to her community involvement in Robertson County made her the perfect choice to receive this state honor.

Tennessee Farm Bureau is the largest Farm Bureau in the nation with a membership more than 650,000, and is a farm organization whose goal is to develop, foster, promote and protect programs for the general welfare, including economic, social, educational and political well-being of farm people of the great state of Tennessee.