In recent months, there have been many conversations about how cattle are and should be marketed in the United States. Some discussions have focused on the optimal level of cattle transactions through certain marketing channels in order to facilitate greater price discovery. A congressional proposal is one that would require packers to buy a percentage of their weekly cattle purchases on the cash market. This approach conflicts with Farm Bureau policy and mandatory cash market minimum presents several other problems, not the least of which is the improbability of it providing higher returns for producers. Farm Bureau policy opposes a mandatory minimum for negotiated cattle slaughter because it would restrict producers’ ability to enter into progressive, value-added cattle pricing arrangements and contracts. In order to more fully understand these conversations and their implications, it is helpful to take a step back and look at how cattle are currently marketed in this country as well as the implications of mandating how private companies make business decisions.

There are a variety of market transactions through which cattle are marketed. Thankfully, due to Livestock Mandatory Reporting (LMR), we have the data to understand how these animals change hands and how these methods have evolved over time. There are four primary transaction types reported by USDA through LMR.

Negotiated purchases, often referred to as the “spot” or “cash” market, are where the price is determined through buyer and seller interaction on the day of sale. Forward contract purchases are an agreement for the purchase of cattle executed in advance of slaughter, where the base price is established. Negotiated grid is where the base price is negotiated between buyer and seller and is known at the time the agreement is made. The final net price is determined by applying a series of premiums and discounts based on carcass performance after slaughter. Formula purchases is the advance commitment of cattle for slaughter by any means other than negotiated, negotiated grid, or forward contract. Formula pricing uses a pricing mechanism in which the price is often not known until a future date. 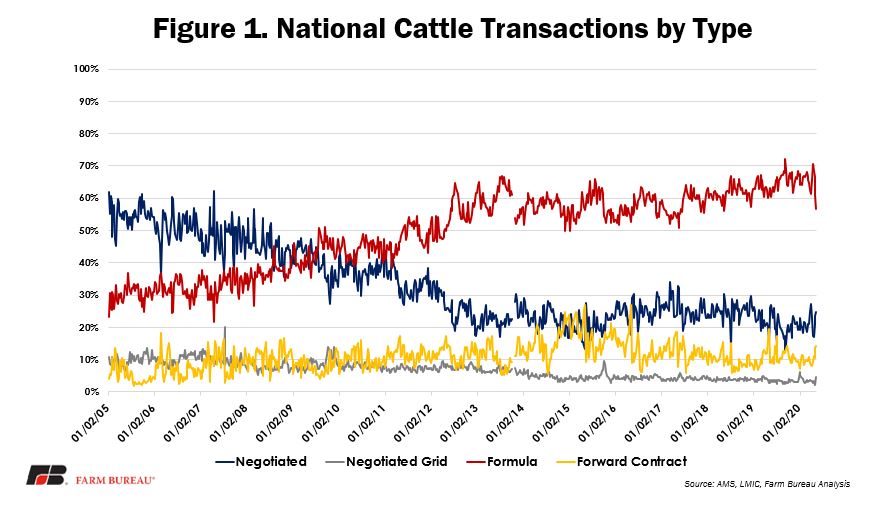 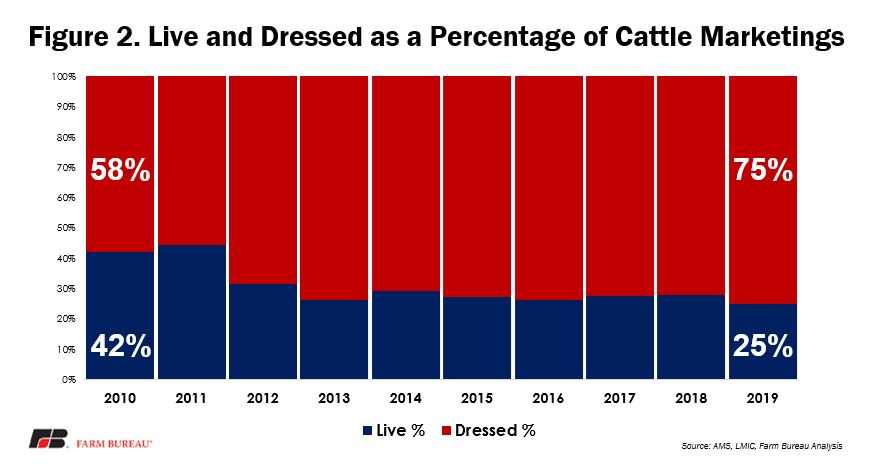 There is also significant variation in the types of transactions within each of these marketing channels. Live cattle transactions have traditionally been dominated by negotiated trade and to some extent, formula transactions. These two are followed by forward contract transactions, while negotiated grid has maintained a miniscule share of the trade. Dressed marketing is very much dominated by formula transactions. Given the large share of cattle that are sold on a dressed basis and the fact that dressed cattle are mostly sold through formula pricing, the end result is reflected in Figure 1 with formula making up the majority of transactions for all cattle. One interesting development is the sharp increase in negotiated grid transactions at the expense of formula contracts. From January through April 2020, the share of negotiated grid transactions for dressed cattle marketings averaged around 4% of the total. During the most recent two weeks for which we have data, that share jumped to 24% and 23% of the total. 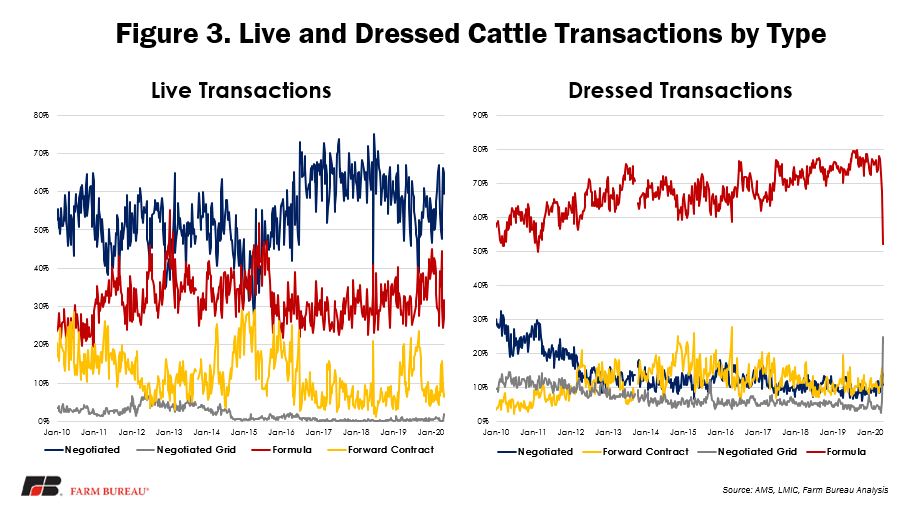 It is also important to understand that types of transactions vary by market regionally. Negotiated trade is more common in certain states, such as Nebraska and Kansas, which have seen negotiated percentage ranges from 40-75% in recent years. Other states typically have very little negotiated trade. In Texas and Oklahoma, for example, negotiated trade accounts for only 5-8% of cattle transactions. These discrepancies between regions contrast with the national picture, where we see negotiated trade around 20-23%. 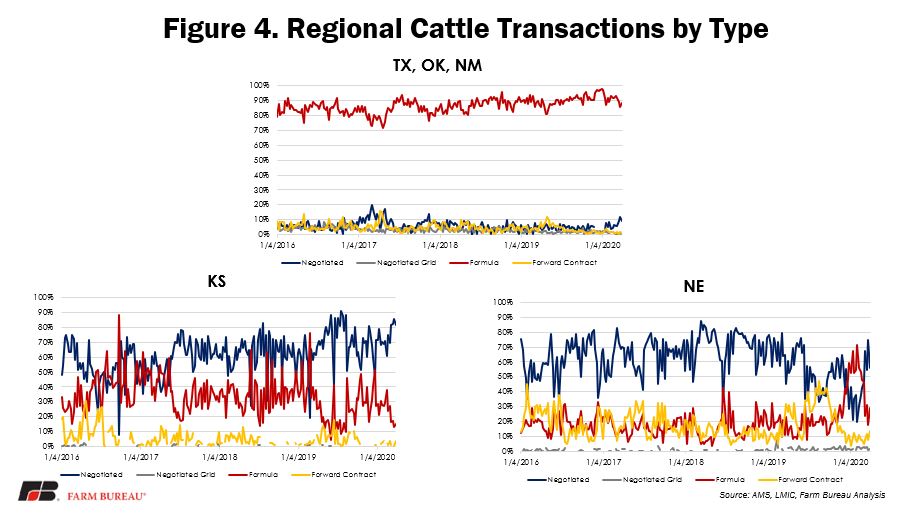 To maintain producers’ freedom to enter into value-added cattle pricing arrangements and contracts known as alternative marketing arrangements (AMAs), Farm Bureau delegates oppose a mandatory minimum for negotiated cattle slaughter. Mandates on negotiated cash trade will ultimately limit the use of AMAs. While more negotiated trade would further bolster price discovery, a minimum negotiated trade threshold means the federal government must monitor and maintain the minimum, inviting further government intrusion into the industry. Furthermore, this additional regulation likely will not solve the problems it is purported to solve and could potentially result in negative consequences for the industry.

“We support rights of producers and packers to enter into formula pricing, grid pricing and other marketing arrangements and contract relationships.” —  AFBF Policy

A key point to remember when discussing the optimal level of negotiated transactions is that PRICE DISCOVERY is not the same as PRICE DETERMINATION. While enhanced price discovery is a good thing, it does not necessarily mean it will result in higher prices (as many proponents of minimum thresholds contend). It is critical to note, the COVID-19 pandemic and its impact on our country’s economy is an unprecedented exogenous shock to the overall food system and supply chain. No amount of negotiated trade would provide relief from supply chain challenges of this magnitude.

The abundant research by academic faculty at various land-grant institutions on the costs and benefits of AMAs and the impacts of mandatory minimum negotiated trading volumes show that limiting the use of AMAs by the beef industry will decrease efficiency, increase processing and marketing costs, and could potentially reduce beef product quality. One of the most comprehensive research undertakings was the USDA GIPSA RTI Livestock and Meat Marketing Study (LMMS). The six-volume, peer-reviewed report, which represents the work of 30 researchers and nearly three years of effort, indicates there are almost no benefits to a mandatory minimum level of negotiated transactions. Instead, according to the study, a mandatory minimum level of negotiated transactions could create considerable costs due to lost efficiency and product quality.  According to the study, these costs would be largely borne by cow/calf producers and consumers. In addition, a recent white paper by Colorado State University’s Dr. Koontz indicates a mandatory policy of 50% minimum negotiated cash transactions would result in a $2.5 billion loss to the industry in the first year and an overall loss of $16 billion over ten years.

There are many conversations happening in the countryside about how cattle are marketed. Many of these conversations have focused on establishing a minimum threshold for certain types of cattle transactions. We can and should promote a more robust price discovery system but not at the expense of a producer’s ability to utilize value-based, consumer-driven marketing arrangements. Farm Bureau policy acknowledges producers, not the federal government, know the best course of action for their individual operations and there is no easy one-size-fits-all solution.

Farm Bureau developed a background paper on this issue which can be found by clicking here.

The above article was adapted from a Market Intel produced by the American Farm Bureau and can be found at this link.