The American Farm Bureau Federation and 41 other agriculture organizations are asking Congress to ensure the USDA has the tools necessary to help farmers in times of crisis. The group sent a letter to House and Senate leadership requesting they immediately provide replenishment for the Commodity Credit Corporation (CCC) through the continuing resolution. Without immediate replenishment, funding for farm bill programs could run out while farmers struggle against low commodity prices, natural disasters, and the coronavirus pandemic.

“For decades, CCC has been regularly replenished to fund programs integral to the farm safety net that Congress has worked tirelessly to craft,” the letter states. “Producers count on programs like Agriculture Risk Coverage, Price Loss Coverage, Dairy Margin Coverage, Marketing Assistance Loans, conservation programs, and many others as they provide food, fuel and fiber for our nation. Without immediate CCC reimbursement, payments and programs would be significantly delayed, jeopardizing operations across the country.”

For decades the Commodity Credit Corporation, with authorities granted by Congress, has provided funding to stabilize and support farm income and commodity prices through programs related to commodity and income support, conservation, export promotion, international food aid and disaster assistance, among others. Since 1987, the CCC has been replenished annually at $30 billion to fund many programs farmers rely on, such as Agriculture Risk Coverage, Price Loss Coverage, Dairy Margin Coverage and the Conservation Reserve Program, i.e., Reviewing the Commodity Credit Corporation’s Borrowing Authority.

Because CCC funds were used to help farmers and ranchers impacted by retaliatory tariffs and COVID-19 through the Market Facilitation Program and the Coronavirus Food Assistance Program, respectively, some in Congress are considering not immediately reimbursing the CCC via the expected continuing resolution to extend government funding.

Without an immediate replenishment of the CCC in a continuing resolution (a provision referred to as an “anomaly”), farm bill programs and payments expected to go out in early October would likely exhaust CCC resources by November. As a result, farm bill program payments after this point would be significantly delayed. With farm-level cash receipts at a decade-low, i.e., Farm Cash Receipts Forecasted to Hit a Decade-Low in 2020 and USDA’s Economic Research Service Releases Updated Farm Income Estimates, the lack of CCC resources would jeopardize farm income, farm profitability and conservation efforts. Today’s article reviews recent CCC expenditures and estimates remaining CCC resources.

To provide immediate financial assistance to farmers and ranchers impacted by COVID-19, in early April USDA announced the Coronavirus Food Assistance Program, funded by both appropriated funds from the CCC and the Coronavirus Aid, Relief and Economic Security Act. Of the estimated $16 billion available in CFAP support, e.g., USDA’s CFAP cost-benefit analysis, $9.5 billion was appropriated to the Office of the USDA Secretary through the CARES Act. The remaining $6.5 billion was transferred from the CCC to CFAP. 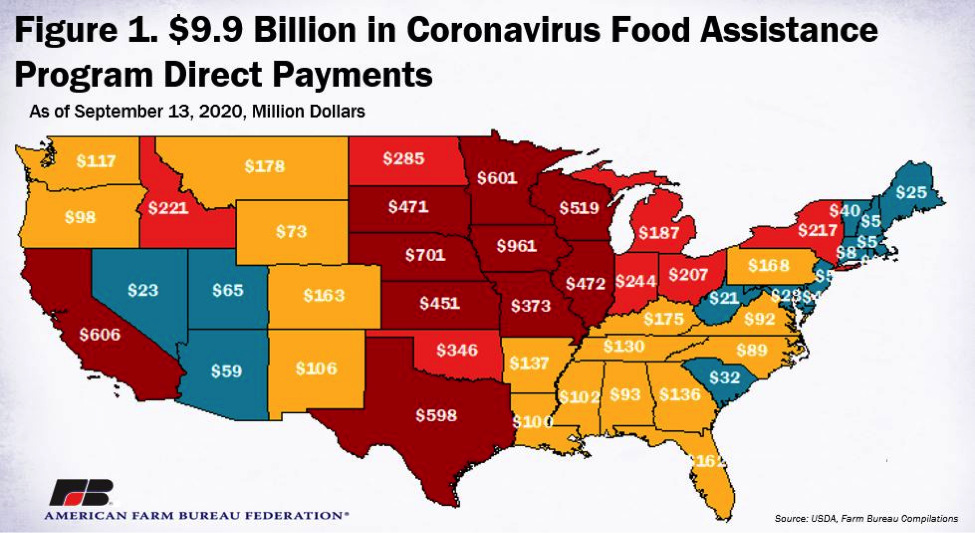 Not Much Left in the CCC

In order to estimate the remaining balance in the CCC, information from USDA’s fiscal year 2021 budget summary on expected CCC outlays was reviewed. For the 2020 fiscal year, $3.9 billion in outlays were projected for loan deficiency payments and Agriculture Risk Coverage, Price Loss Coverage and Dairy Margin Coverage payments. Other CCC programs such as MFP payments and disaster program payments were projected at $14.5 billion. On top of these payments, approximately $6.5 billion was charged to CFAP for COVID-19 relief and $530 million was used to fund the Seafood Trade Relief Program, i.e., USDA Announces Tariff Relief for the Seafood Industry. An additional $2 billion in net outlays was estimated for conservation programs. These projected net outlays total nearly $28 billion, and, if realized, suggest as little as $2 billion remains in CCC borrowing authority. Figure 2 highlights actual and projected CCC net outlays by fiscal year. 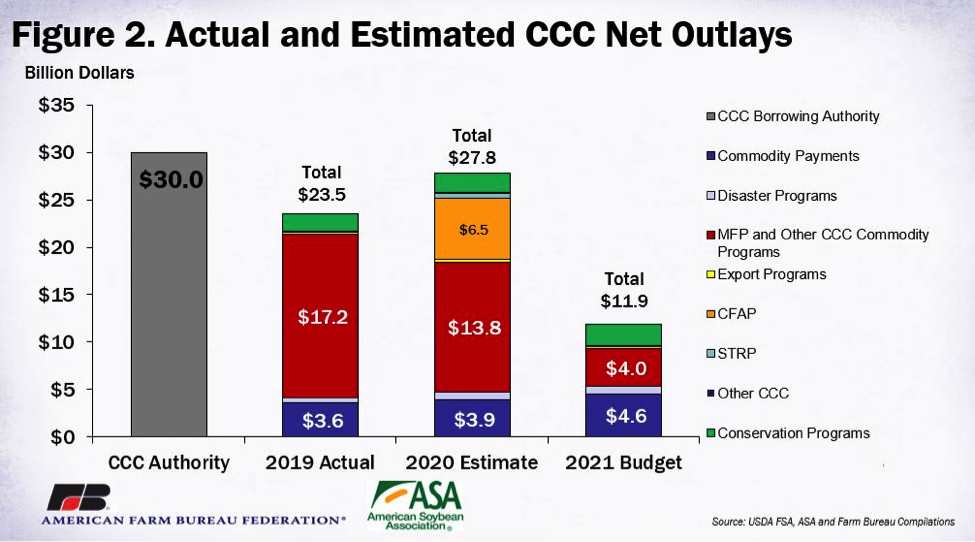 The CARES Act reimbursed $14 billion of CCC expenses, however, congressional leaders intended for this replenishment to be used to offset COVID-19-related financial losses. It’s expected that USDA will announce a second round of CFAP payments in the coming weeks, which will likely use the $14 billion.

Importantly, with a remaining balance of $2 billion or less, USDA’s projected outlays of $4.6 billion in commodity support payments and $2.3 billion in conservation payments for fiscal year 2021 are likely to exceed remaining CCC resources – likely exhausting the CCC and delaying any additional commodity support or conservation payments from being made for several months. Farmers are currently expecting many of these payments to begin in early October given the 2019/20 crop year’s low commodity prices. Without these payments, or if they are delayed, many producers may have challenges in the short run covering operating costs or servicing the record $434 billion in farm debt.

The magnitude of the next support package is unknown. However, given that CCC resources were used to partially fund the first round of CFAP and will be used for the newly announced Seafood Trade Relief Program, USDA likely does not have sufficient resources to meet upcoming farm bill and conservation program payments beyond October without an immediate replenishment of the CCC in a continuing resolution. Absent CCC replenishment, key farm bill commodity support and conservation program funding – which had overwhelming bipartisan support two years ago –  would be delayed.

Given that COVID-19 continues to impact the farm economy, agricultural trade continues to face headwinds, farm-level cash receipts are at decade-lows, commodity prices remain depressed, farm debt is record high, working capital has been cut in half and the rate of return on assets is historically low, farmers and ranchers need more assistance through an immediate reimbursement to – and expansion of – the Commodity Credit Corporation. Now is not the time for policymakers to further risk the farm economy by delaying much-needed financial resources.