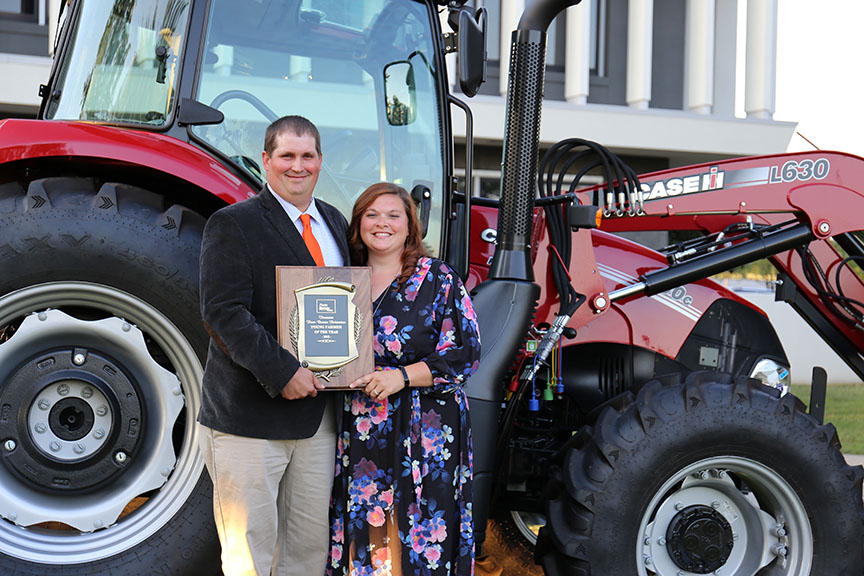 The results were announced during the Tennessee Young Farmer Summer Conference held at the headquarter offices of the Tennessee Farm Bureau in Columbia, Tenn. The young row crop and livestock farmers from the Morrison community competed against 13 other county contestants across the state to be named state winners and have the opportunity to compete for national honors in January.

AJ and Valerie were named this year’s winners based upon farm and financial records from 2017 as well as their leadership on their farm, in their community and Farm Bureau. They farm 1200 acres of corn, soybeans, wheat and run a small dairy herd. They also provide custom harvesting for local farmers.

Both AJ and Valerie have been very active in the Young Farmer and Rancher program, as well as the Coffee County Farm Bureau and their local community. Both have served on the Tennessee YF&R State Committee, with AJ even serving as state chair in 2015 and Valerie named Outstanding Young Woman in 2017.

As state winners, the Teals receive a year’s free use of a brand-new Case IH tractor up to 150 hours. They also receive $1000 and a fully-loaded Kubota RTV from Tennessee Farm Bureau, an insurance policy to cover the tractor for one year from Farm Bureau Insurance of Tennessee, $500 in qualified Farm Bureau Services, $500 in services from Farmers Services and a trip to the American Farm Bureau Convention in New Orleans, Louisiana in January 2019, where they will compete for national honors with other state winners. The national winner will get a 2019 truck, provided courtesy of Southern Farm Bureau Life Insurance and paid registration to the 2019 YF&R Leadership Conference in Milwaukee, Wisconsin.

Clint and Emily Workman of Obion County were the second-place winners in this year’s competition and will receive free use of a band-new Kubota tractor up to 250 hours.
District winners were: District One – Robert Hill of Lauderdale County; District Two – Lee and Halie Bagwell of Robertson County; District Three – Kary Robinson of Franklin County; District Four – Levi and Caroline Holt of Overton County and District Five – Lorie and Ben Fleenor of Sullivan County.